Adding a drop shadow and other effects


Version 3 of the software introduces the following effects
These effects can be added to any template object which currently include:
(In theory it is also possible to add an effect to a barcode although we can't see why this would be useful)

To add an effect to an object


Note an object may have multiple effects applied to it. 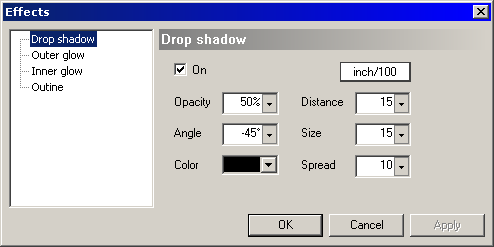 Each effect presents the user with its own set of parameters. Parameters common to all effects include:
Other parameters include:
Using object effects in practise
The object effects give the user live feedback as each parameter is manipulated meaning the user will see the result in real time. It is therefore anticipated the most common approach to applying an effect will be to simply adjust each setting until the effect "looks right".

Copying an effect
Once an effect has been set it may be copied with the purpose of pasting it to another template object.

To copy and paste an object effect
Adding effects to scalable template objects
Sizeable item designs (NeoPack/Professional, PackBuilder, NeoPack/Plus, OutPost) and Subject Blocks (NeoComposite and CompositeBuilder) are scalable templates.? The user does not enter absolute size when designing these templates as their final size will depend on the layout on which they are being used. The size units for these templates and all objects on them is therefore "abstract".

When adding effects to an object on a sizeable template the units are therfore also "abstract". For this reason it may be difficult to gauge the final appearance of the effect when adjusting each effect parameter. In these situations it is recommended the user test the effect on finished product to ensure the effect is as expected.