Home → Knowledge Base → Most Recent →

QR codes can be used to match images to families. The encoding of the QR code can be either:

Upon importing the images, the software will read the QR code of the first image it comes with a QR code and will match it to the family specified in the QR code. (An option exists to not match or even import the "lead" image - this will be discussed later). Subsequent images will be matched to the same family regardless of whether they contain a QR code or not - this allows multiple images to be matched to the same family without the need for a QR code in each.

The process can therefore be summarised thus:

If the family does not exist

A feature of the system is that the family does not yet have to exist in order to match or allocate an image to it. In these cases the family is automatically created as the image is imported and named with the name in the QR code.

When importing images with a view to matching via QR codes, various options are available. These are set in the Images Import window as shown in Figure 1 below.

First and foremost the 'Use image barcode information' must be checked in order to "tell" the software that QR images are about to be imported. With this option checked, further options are then available. In most cases only the first, or 'lead' image has a QR code as in the screen grab below. With this in mind the option then exists whether or not to import this lead image and if so, whether to match/allocate it.

Encoding and printing the QR code

Adding the QR code to a template 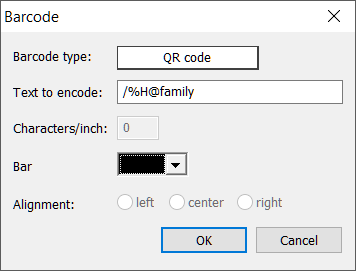 Having created a template with the QR code, it may be printed in Point and Click Mode.

In Point and Click Mode simply select the family or families required from the Family tab. Then click the QR template. A page will be added to the print queue for each of the families.